Ever since our own Sam Neil put down roots with his Central Otago winery in 1993, it seems many in the entertainment world are star-struck with owning vineyards. Over the past few decades, the title deeds of many of the world’s high-profile wineries have read more like the cast of a Hollywood movie. From Francis Ford Coppola to George Lucas, Sting to Kylie Minogue, a growing number of celebrities are blending creativity with chemistry with surprising results. So we decided to find out why so many stars moving from the red carpet to the green hills.

And we’re not only talking about celebrities simply adding their name to the label (although clearly this has proved successful with Invivo and their partnerships with Graham Norton and Sarah Jessica Parker).  Many of today’s celebrity investors are quite hands-on in the process and have often transformed run-down vineyards into superstars.

Back in 2011, when they were on better terms, Brad Pitt and Angelina Jolie took ownership of a historic Côtes de Provence winery named Château Miraval. Just a year later, their rosé was named best in the world by the LA Times. Their latest achievement is a Champagne named ‘Fleur de Miraval’, rated 94 points by Decanter magazine. 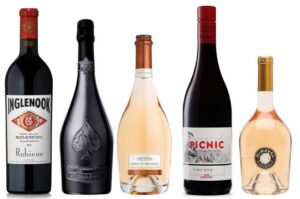 Founding member of The Police, Sting, bought Il Palagio – a run-down 16thC vineyard in the Tuscan hills in 1999, and subsequently took it from extinction to distinction. Wine Spectator named Sting’s Sangiovese, Cabernet Sauvignon and Merlot blend amongst the top 100 Tuscan wines in 2016. One of his latest releases, named ‘Message in a Bottle’, has also been quite a hit.

The Godfather director, Francis Ford Coppola, is said to have made more wines than movies as owner of several wineries including a superstar vineyard in Sonoma, California winery appropriately named ‘Francis Ford Coppola’. Meanwhile Star Wars director George Lucas bought ‘Skywalker Vineyard’ 20 years ago and is turning the Marin County wines into a real force.

From Snoop Dog to Cliff Richard, Kurt Russell to Cameron Diaz, there seems to be no limit to the A-listers getting onto the wine list. Sports star aren’t missing out either. Golfer Ernie Els, NBA star Dwayne Wade, cricketer Sir Ian Botham and Superbowl-winning NFL quarterback Joe Montana have joined the team of vineyard owners.

There’s no obvious single reason for buying a vineyard – and it’s not necessarily about making money. David Beckham bought a Napa Valley winery as a gift for his wife Victoria – yet they’ve been quite discreet about its name and exact whereabouts, shying away from using their high profile to generate sales. For Sam Neil, it’s truly a labour of love. “It’s the whole business of working with soil and with seasons that has greatly enriched my life.” The UK’s Decanter magazine described his Two Paddocks Pinot Noir as one of the top 50 “most exciting wines of the world”, while in the US, Wine Spectator Magazine scored it 95/100.

Of course, celebrity appeal also helps with sales. Brad and Angelina’s release of 6,000 bottles of their rosé in 2012 sold out in just five hours. Kylie Minogue’s rosé sold 70,000 bottles in its first week, while total sales of her wine range have reached a million bottles in less than a year.

You probably won’t see a well-known celebrity singer or actor getting involved with Lawson’s Dry Hills any time soon, although we did launch the Max – an exclusive pair of wines in collaboration with famous artist Max Gimblett last year. And of course we have our own superstar winemaker, Marcus, and his supporting cast!